The first stop of my new voyage on the Celebrity Constellation was Alicante, Spain.  The weather on this day, Monday, November 21st, 2011 was very rainy.  I decided to stay aboard the ship to read and save my legs for my up coming tour to the Alhambra the next day.


You may read about Alicante, Spain by clicking here.

Tuesday, November 22nd, 2011 the weather was still a bit uncertain. The port area of Malaga, Spain where the ship docked was sunny and dry, but there were foreboding dark, clouds over the high ground around the city that threatened stormy weather inland.


By clicking here, you can learn about the area and city of Malaga, Spain


Our tour bus left early for the approximately 2 hour climb and drive out of Malaga to inland Andalucía, the Spanish province where the Alhambra or “Red Fortress” is located.


I noticed there was a lot of prickly pear cactus at the sides of the road. Just outside Malaga, there were little groups of isolated houses perched high on the steep hillsides. It would be a long commute back to the city from these lonely homes.


The main products of the area are almonds and olives in generally small hillside orchards.  As we neared the inland valley nearer to Granada, the city next to the Alhambra, we passed fields of asparagus and stands of popular trees.

The Alhambra sits on a promontory of several hills to the northeast of the city of Granada.  The complex of palaces and forts is heavily walled.  Originally all the walls and buildings were whitewashed which has long been washed off leaving them red from the color of the exposed, local building materials.


The walls extend for approximately 30 kilometers (18.6 miles) around the entire complex.  The labor to build much of the complex of palaces and fortifications was provided by Christian slaves held by the Arabs. The Arabs held much of Spain until they were completely expelled from the Spanish Peninsula by the two Spanish Monarchs – Ferdinand and Isabella, in 1492.


For complete information, interactive maps and many photos of all the palaces and sights in the Alhambra - please click here.


It started to rain as we walked into the Alhambra complex. The site is very large and comprises 4 or 5 main palaces that are arranged in somewhat of a helter skelter fashion.

It is a long walk from the entry point to the Generalife
(Hay-nuh-rawl-ee-FAY), a palace that was used as a guest house for official visitors and as a summer residence for the Emirs and Sultans. There is also a set of very welcome and needed public restrooms build under the stairway up to the Generalife.

I did not climb the flights of stairs that it took to get to a clear view of the Generalife. I wanted to save my legs for the rest of the tour.
Please click here for images of the splendid gardens of the Generalife Palace

Here is information about the Generalife Palace in the Alhambra


For the complete story about the Alhambra, click here.


Soon we were seeing the beautiful decorative work of the Alhambra's walls and ceilings.  To me this was the attraction of the place I had wanted to see with my own eyes since I first saw pictures of this magical place when I was a child.  Exotic writings and patterns on the walls, ceilings that looked as if they had been formed from cake icing.


Next we entered the Hall of the Ambassadors, the largest room in the complex.  This is where Christopher Columbus received the support of Ferdinand and Isabella to make his voyage to the East.

Columbus was hoping to find a new route to secure the spices and other trade goods from India and Asia - but he found the New World instead.


The rise of the Islamic empires - the Seljuk and the Ottoman Empires - had stopped the flow of trade goods, particularly spices,  into Europe that came over the Silk and Spice Routes from India and Asia.  The price of pepper and other spices was valued ounce for ounce the same as gold at various times while the Silk Road trade was cut off from Europe.

I suppose you could say that the rise of Islam resulted in Columbus discovering the Americas. 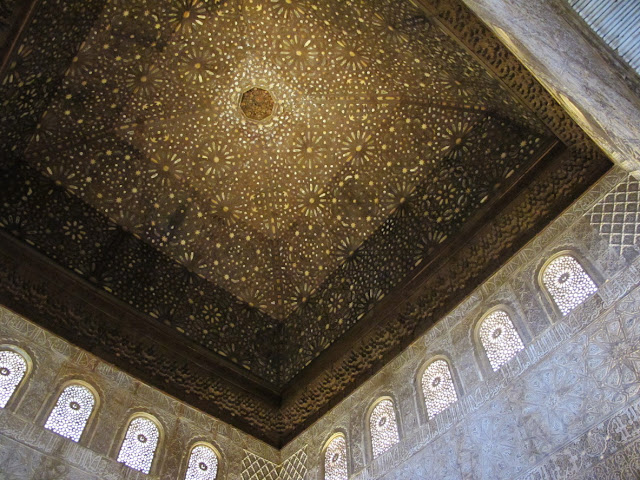 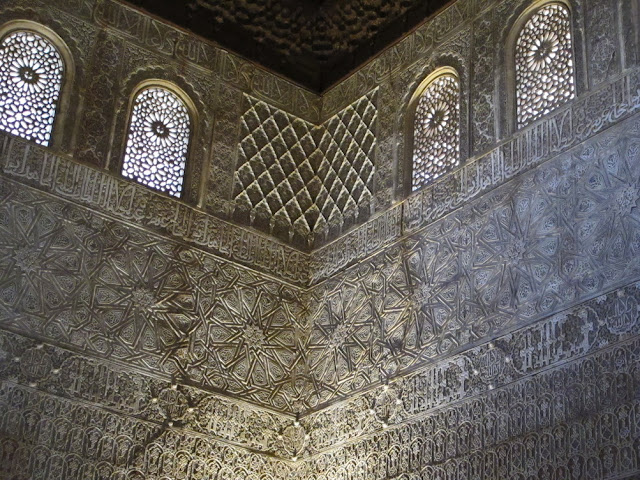 Find out about Tessellation by clicking here.

To learn more about MC Escher and see his art, please click here

Look at a fine example of the use of tessellation at the Alhambra by clicking here.

The writer, Washington Irving, stayed at the Alhambra and  wrote "Tales of the Alhambra" from the inspiration of that visit.


We entered the Room of the Two Sisters as the end of our time at the Alhambra approached.  The room is named after two marble "sister" slabs in the floor on each side of an inside fountain and pool in the room.

In my opinion, this room is the high point of the mixture of the styles of architecture - Moorish, Arab, Gothic and Baroque achieved at the Alhambra.  To be in the room is like being on the inside of a large, sugary confection.

The ceiling molding decorations or "stalactites" has over 5,000 individual moldings - no two are the same!  The beauty and complexity of this room overwhelm your senses.


The Court of the Lions has been under a major renovation for at least 3 or 4 years.  From our view of this part of the Alhambra, it looks like it might be possible that the renovation will be finished by the summer of 2012.


Our tour group left The Alhambra and Granada for the long drive back to Malaga.  We arrived just 15 minutes before the Constellation was due to leave port.


I was tired with sore legs due to walking the great distances between the different places in the Alhambra. But, I had fulfilled a childhood dream to view the magical, Moorish palaces of the Alhambra with my own eyes.

Next time - Itinerary change to Gibraltar


Please click the colored link to view my other blog about living in Hawaii "Life in the 50th State"
Please give me photo credits if you use or share my photos for non-commercial use.
I use a Canon G-11 digital camera on a mono pod - usually without flash

Please contact me at traveleral@aol.com should you need to use my photos commercially. Larger, digital files of my photos are available.

I encourage you to share this blog with your family and friends.

Your comments and criticisms are my reward for the effort to do this blog – they are appreciated.
Thanks for taking the time to read about my travels.
Posted by Traveler Al at 10:29 PM

Traveler Al
I am retired from a very rewarding position with a non-profit foundation. I worked with the greatest people in the world, foster parents and social workers and others in the helping professions. I am a widower - so I travel solo now.